This article describes how to add a concentration normalization step to your protocol.

The concentration normalization action aims to obtain the same final concentration of a range of samples, that is present in several labware locations.
The starting point is a range of different samples with varying concentration values present in several labware locations (several wells of the same multi-well microplate/matrix or several different tubes or a combination of these). All reagents present at the start should have the same concentration units.
OneLab has a wizard, guiding you through several steps to obtain the desired result. There is no need to do any calculations yourself: the software calculates the volumes of the sample reagents and the volume of the buffer reagent to obtain the desired final concentrations and volumes. The software will also automatically tell you if it is possible to execute this action at all. Due to limitations of the concentrations that are present in the range of samples at the beginning, or the overall maximum volume of the destination labware (limiting the amount of dilution buffer that can be added) certain actions cannot be executed. You will receive a warning in those cases (see example below).

First of all, you have to be sure that the appropriate labware are added to the virtual bench (see the article “Adding labware to the virtual bench”). In the examples that will be discussed here, two 96-well microplates and a larger tube with buffer are present. One microplate hosts a range of different sample reagents with different concentrations, while the other is used as a destination. See the article “Fill a labware with a reagent” to add reagent to the labware on the virtual bench. Therefore, the starting conditions of the two examples discussed here, are the same and as follows: 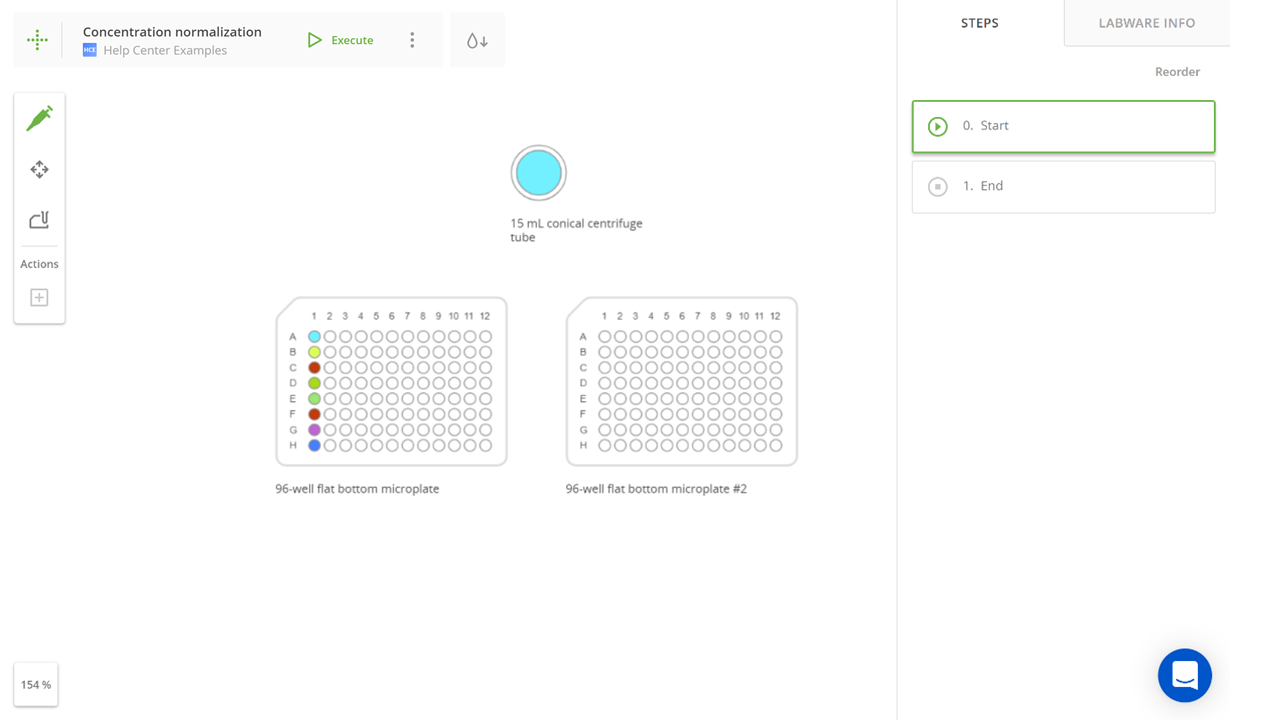 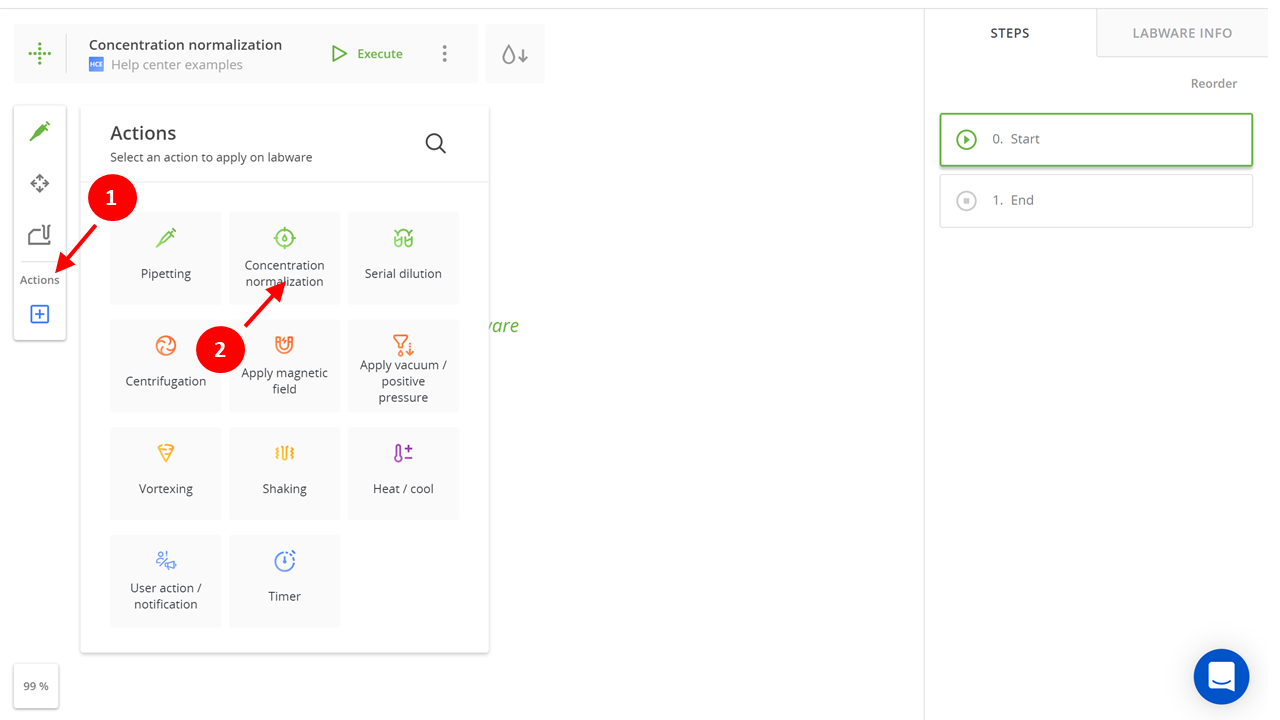 The “Concentration normalization” menu will appear: 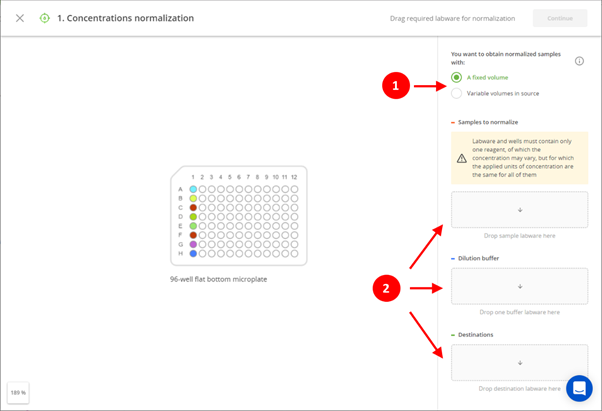 There are two main normalization modes (indicated by “1” in the above figure). Therefore, two examples will be discussed below.

Example 1: Use of “A fixed volume” mode.

You need to select the labware that is involved: sources (A), buffer (B) and destinations (C).

A) The labware locations that act as source have to be dragged to the top field, as indicated in the figure (#2 in the figure above, top arrow). The reagents that are present in the labware locations can be different in name, volume and concentration, but must have the same units of concentration. It is also important that none of the labware locations has “auto” value for the volume, but rather has an arbitrary but fixed volume defined (large enough, to include the dead volume of the labware). Of course, the reality should equal the protocol settings (or the other way around). If the exact volume is not known, so long as the pipette tips will not clash with the labware or overflow the wells, you can set default volumes that are large enough to complete the task and set the pipetting to be done ‘with respect to the bottom’ of the labware.

You can import or manually select the wells you would like to use as a source (see the articles “Selection of labware locations by importing information from an external source” and “Selecting sources and/or destinations on a labware with multiple locations manually”. 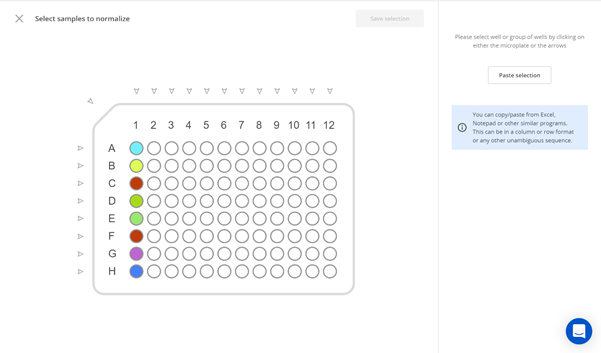 In this example, the entire first column is selected: 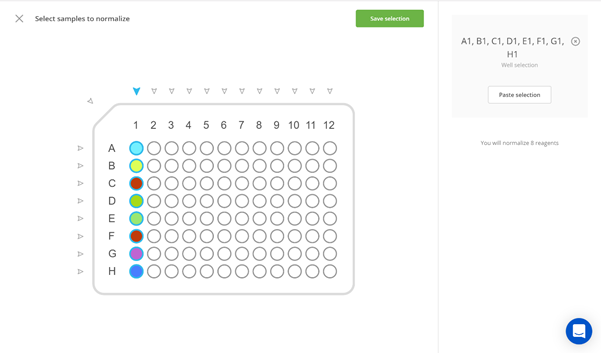 B) The reagent that acts as the dilution buffer needs to be present in a single location, it will be used for the normalization of ALL selected samples. You need to drag this labware to the field in the middle (#2 above, center arrow). In this example a 15 mL centrifuge tube is used. The buffer reagent in this labware can be of arbitrary choice.

C) The destinations labware should be able to host the same number of samples as will be transferred from the source. You need to drag this labware, in this example a second 96 well microplate, to the bottom field on the right side (2, bottom arrow). Like for the sources, you can either import or manually select the destinations (see point A above).

In case you made a mistake, you can remove the undesired labware and drag the desired labware to the field you want during a retry (red circles in below figure). Also wells of a multi-location labware can be re-selected in case of need (red arrows in the figure below): 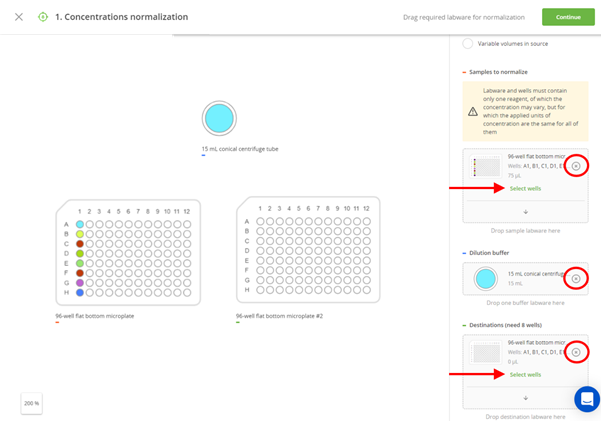 During the next step you need to indicate what you would like to obtain by confirming or overwriting your previous choice of normalization mode. 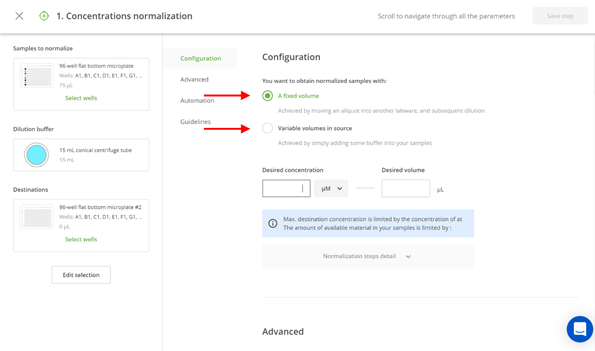 The steps you have to fill out in this menu are similar as for the “Single pipetting action”. Including several sections: “Configuration”, “Advanced”, “Automation” and “Guidelines” (see also the “Pipetting menu” article). The different sections update automatically according to your choice between “Fixed volume” and “Variable volumes in source”. Changing tips between pipetting steps and the position of the end of the tip are important parameters, since concentrations are involved, contamination should be considered. The dedicated articles explain in detail each of these settings.

Therefore, to obtain all equal samples with a maximum concentration at the end, the action is limited by the lowest concentration present among the source samples, i.e. 285.714mM. Samples can only be diluted. This sample also contains the least amount of material of interest (since all sample volumes are equal, this is easily deducted): 85.7142umol.

The maximum volume that can be used in the destination microplate is in this case 360uL, therefore in this first example, an arbitrary (but smaller) target volume of 150uL is chosen. The target concentration is set to 200mM (lower than the lowest concentration among the starting samples), such that ALL samples will be diluted, but in such a way that also for the lowest concentration, the dead volume of the source labware is still respected (this sample is the least diluted, so requires a relatively large amount of sample and little buffer). 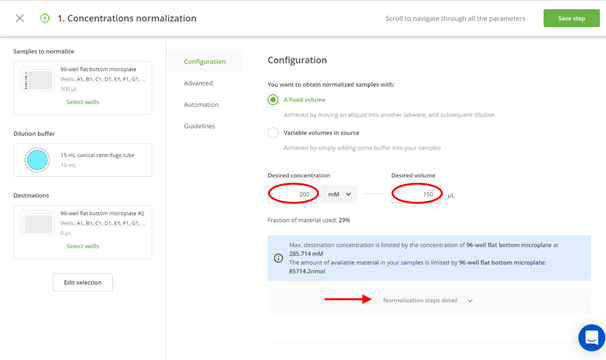 The red arrow in the figure shows you the collapsible overview of the normalization steps in detail. When you click here, the overview shows you how much buffer volume and how much sample volume is used during each of the steps, including source – and destination locations, as shown in the top-part of the table below: 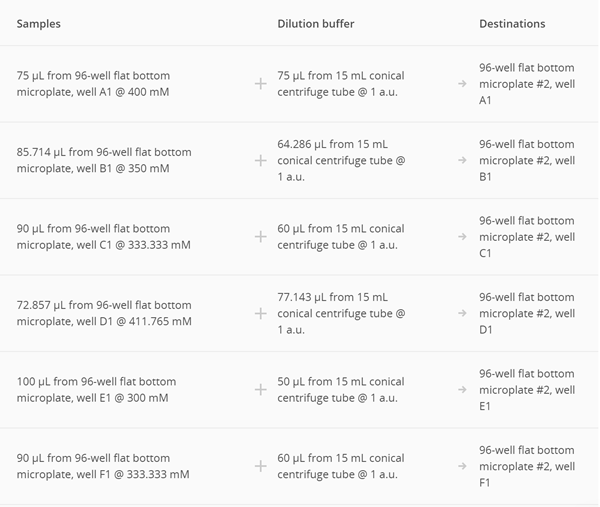 The final result is as follows: 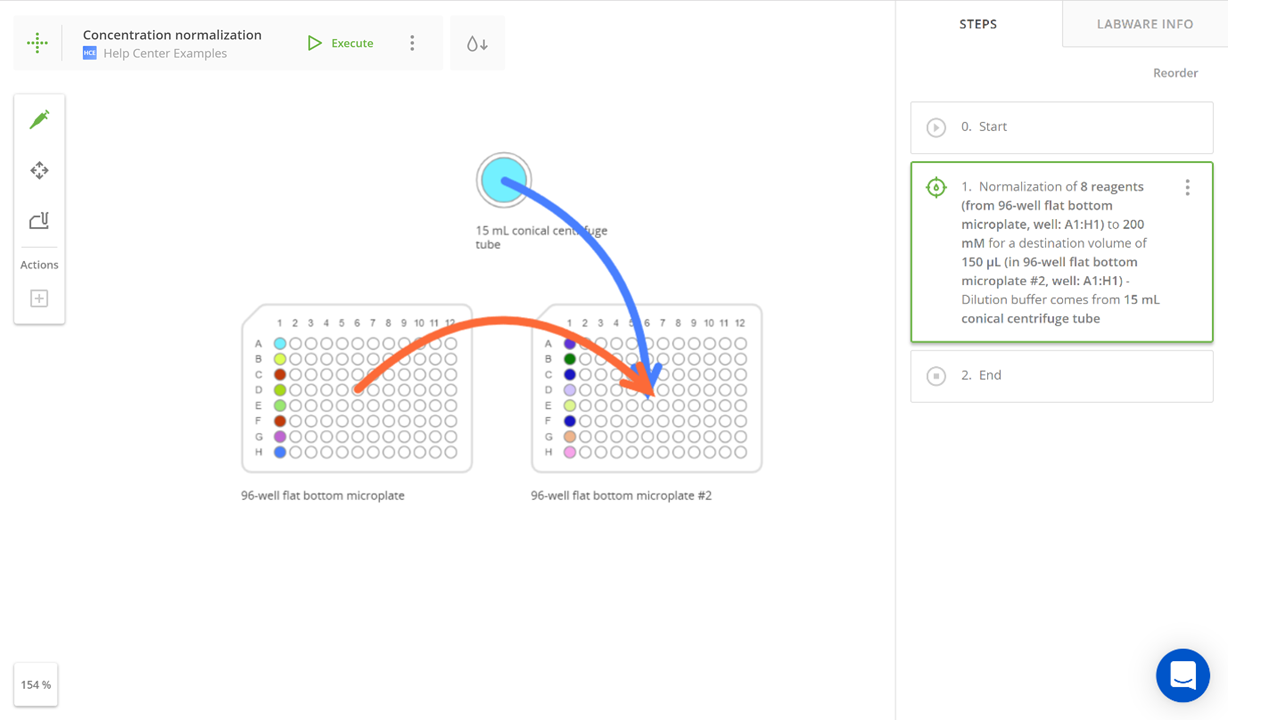 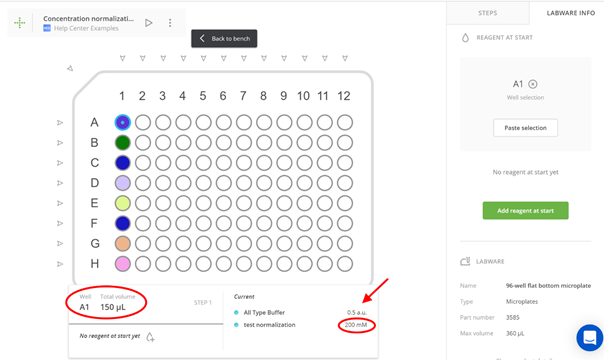 This option does not require to add a destination labware, since the source locations are used as destination locations as well. Most of the explanations above are also valid for this concentration normalization mode.

In this second example, aiming for “Variable volumes in source”, the wells A1 to H1 are all manually set to contain 100uL of the reagent that needs to be normalized (“Reagent at start”). Again, they have the following concentrations: 400mM, 350mM, 333.333mM, 411.765mM, 300mM, 333.333mM, 285.714mM and 375mM. Here the volumes are set to a smaller value as for the first example, to have more flexibility in the amount of buffer that can be added to each of the source locations. In contrast, in the first example, the dead volume was an important parameter and more volume was beneficial, since the reagents were moved from the source locations to other destination locations. Here additional buffer is dispensed in the same locations of the samples and thus, more free volume is beneficial.

Following this input, to obtain all equal samples at the end with a maximum concentration, this action is still limited by the lowest concentration present among the source samples, i.e. 285.714mM. This well also contains the least amount of material of interest (since all sample volumes are equal this is easily deducted): 28.5714umol. However, to obtain all equal samples at the end with a minimum concentration, this action is limited by the highest concentration, since the most buffer needs to be added to that sample and therefore, the maximum volume of the location is the limiting factor. The highest concentration is 411.765mM. Since the volume for all samples is set to 100uL and the maximum volume of this labware is 360uL, there can be 260uL of buffer added at most. This leads to a concentration of 411.765mM x 100 uL / 360 mL = 114.379mM. 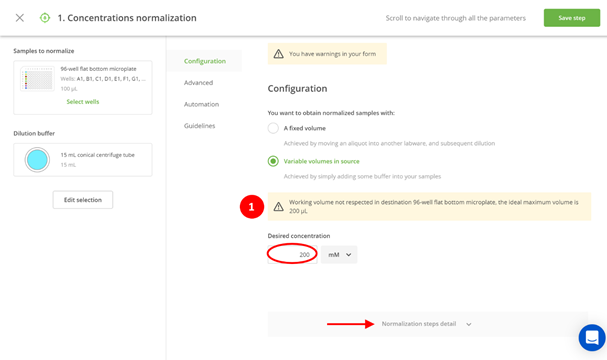 Note that the software takes into consideration good practice behavior: a 360uL well should not contain more than 200uL, since that is the ideal working volume (indicated by “1” in the figure above). However not ideal, the software only displays a warning, but still allows you to work with volumes up to the absolute maximum capacity of the labware (in this case 360uL).

Again, the red arrow indicates where you can click to see the detailed overview of the entire action: how much buffer volume and how much sample volume is used during each of the steps, including source (and thus destination) locations. The entire table looks like this: 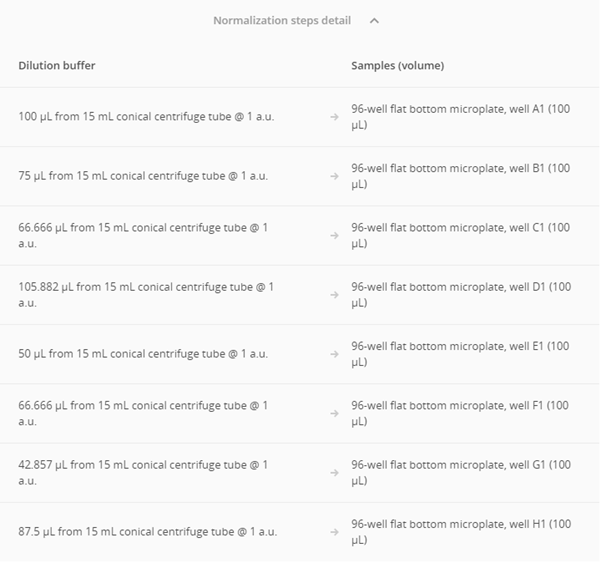 Note that well D1 will contain slightly more than the ideal 200uL (100uL of sample + 105.882uL of buffer reagent), but this is nothing to worry about. The final result for this second example is as follows: 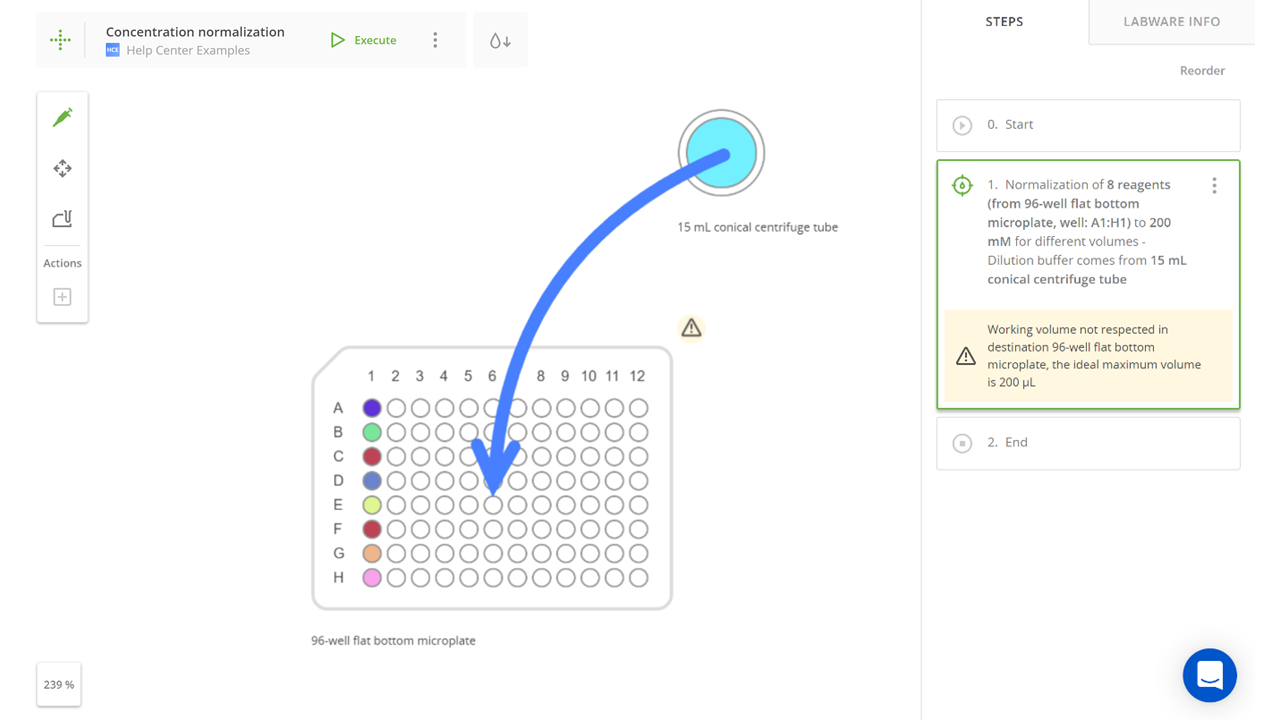 On the virtual bench, the warning about the working volume is highlighted, such that you cannot miss it.

The following figure shows that buffer was added to the samples and that the samples themselves were not transferred. The information about the “Reagent at start” is highlighted by the red arrows below, while the target concentration is indicated by the red circle. The overall volume of the selected destination location is indicated in the red rectangle and varies from location to location. 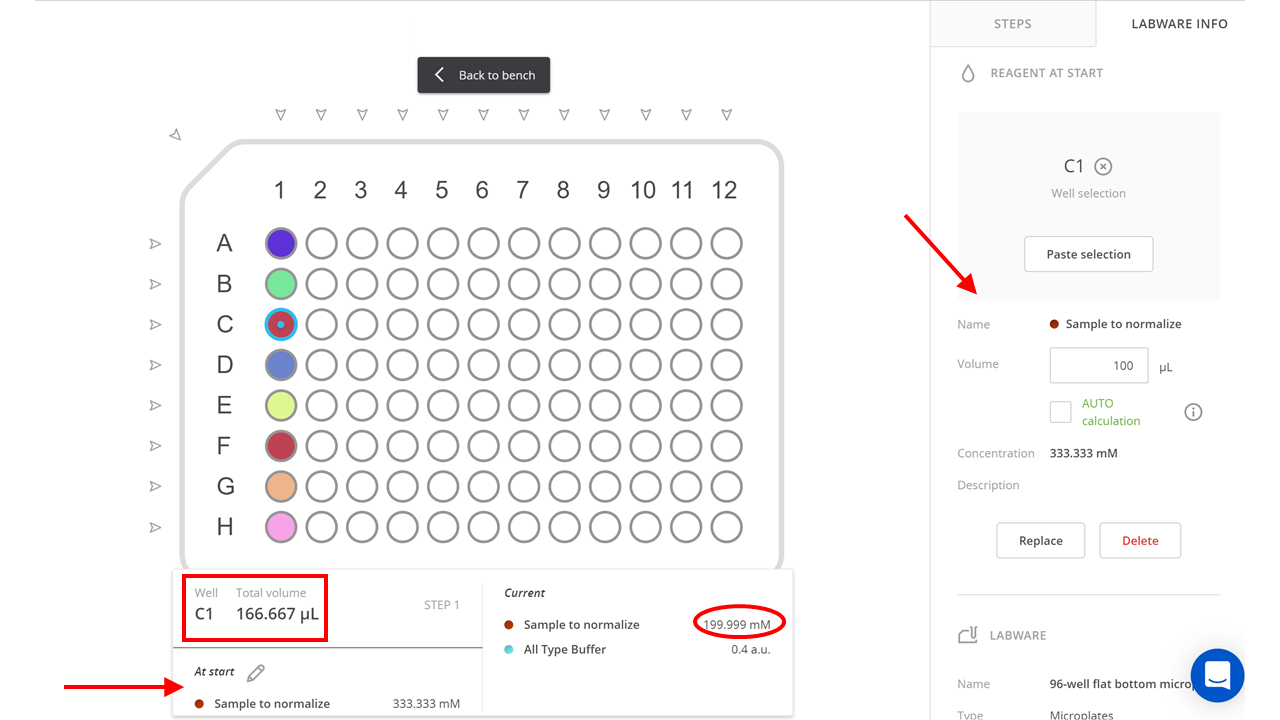