This article describes the mixing options present in the Advanced section of the Pipetting menu.

In the “Pipetting” menu, you can set several options according to the needs of your application. These pipetting parameters are organized in four sections: Configuration, Advanced, Automation and Guidelines.

Under the “Advanced/Mixing” section in the “Pipetting” menu, you can indicate how you want to take mixing into consideration. You can indicate if you want to have mixing at the source and/or destination separately, how often, how fast and how much liquid in total needs to be aspirated and dispensed during the mixing process. 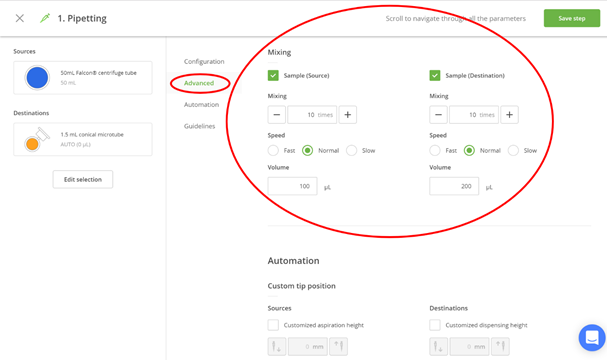 When you need to mix the reagent in the source, check the checkbox labelled “Sample (Source)” and indicate how often you would like to mix (i.e. aspirate and dispense as a coupled consecutive pair of actions).  Also you can indicate the speed of the mixing: “Fast”, “Normal” (default) and “Slow”. Finally you can set the total amount of reagent that needs to be aspirated/dispensed during the mixing.

Similar options are available for mixing at the destination.